For the 2018-2019 academic year, almost ten percent of Houston ISD (HISD) students participated in this year’s annual School Choice lottery; participation versus last year was essentially flat when growth was up 19% versus 2016. Families submitted an average of 2.5 applications each for a total of 52,123 applications submitted during Phase I of the lottery. 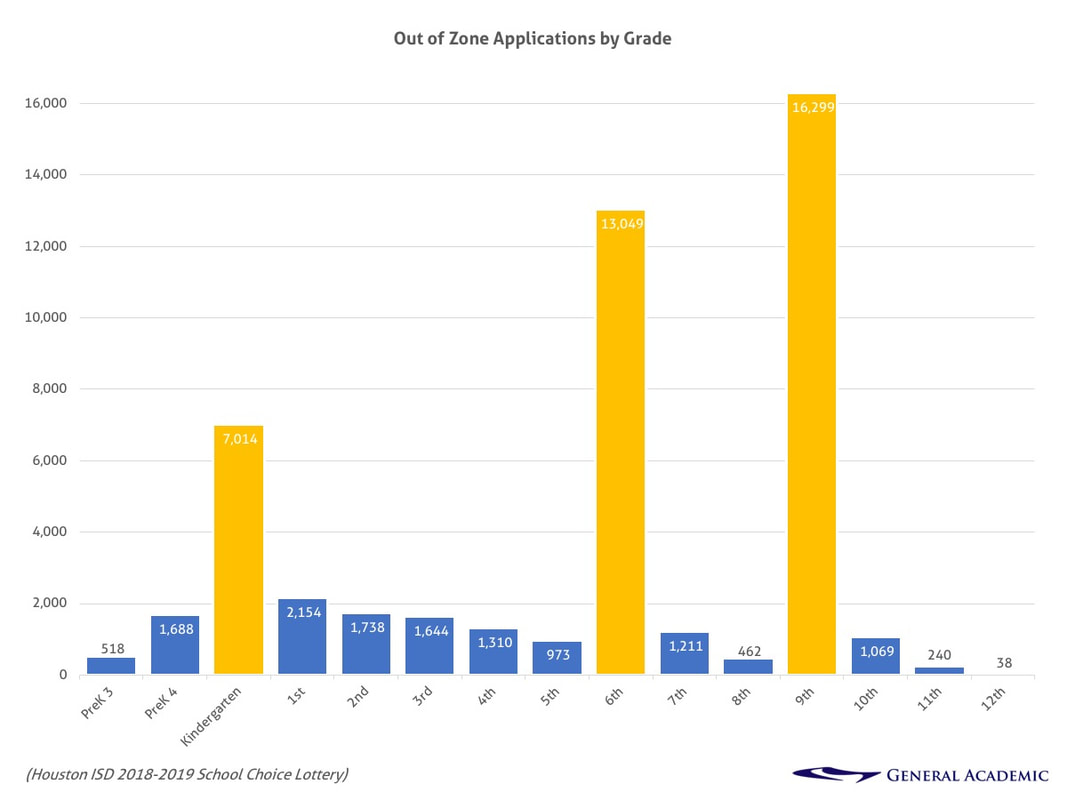 —–
This analysis refers to a previous lottery. For more recent analysis, click here.
​—–

On average, families had about a 20-30% chance of gaining admission to a desirable magnet school for a prime entry year, the year when the most number of seats are available for a given school. The prime entry year for most HISD schools is kindergarten for elementary, sixth grade for middle, and ninth grade for high school.

While all students are automatically accepted into the school in their zoned neighborhood, the School Choice lottery allows families to apply to schools in other neighborhoods. The ability to attend an “out of zone” (OOZ) school is particularly appealing if families cannot afford to spend $2.5 million to buy into the neighborhood of number one River Oaks Elementary for example.

Assuming that parents would rather not take the roughly one-in-five chance of placing their child in the public school of their dreams, they could spend about $1.9 million to buy into the most exclusive neighborhoods around West University and River Oaks elementary schools. Buying a home (or renting an apartment) in one of these neighborhoods grants automatic admission to these highly coveted schools.

​But is the home value worth the cost versus living somewhere more affordable and opting for private school? Assuming that families pay 2.5% property tax on $1.9 million, that equates to $47,500 in annual property tax. With two children in HISD, that’s $23,750 per child or about what it cost to attend a desirable private school. 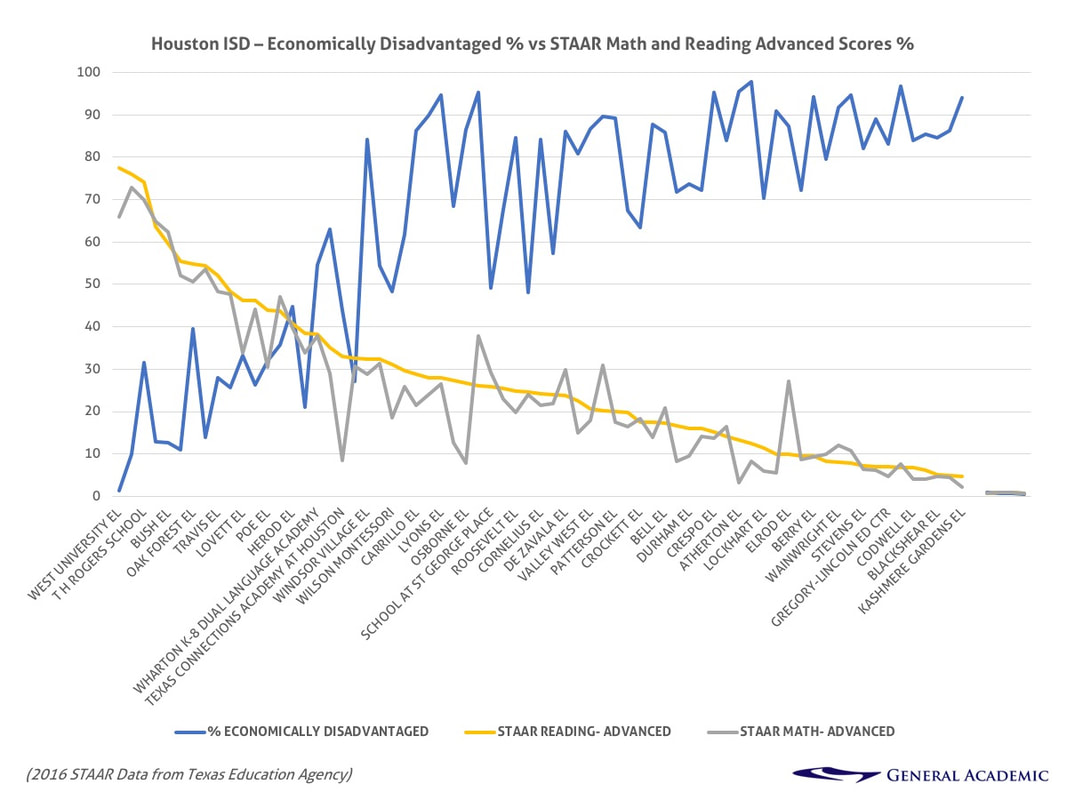 Families are wise to seek out schools in rich areas. General Academic’s research indicates that there is an up to 76% correlation between the Texas-wide accountability test, STAAR, results and the percentage of the student body that is economically disadvantaged. No other statistic tracked by the state of Texas comes close to this correlation including teacher pay, student to teacher ratio, and per pupil spending.

Some magnet schools, particularly elementary, do not have admission requirements other than the families reside within HISD. However most schools have minimum requirements such as that students qualify as Gifted and Talented or be particularly good in math and science (DeBakey High School) or possess a surprisingly good artistic ability(High School for the Performing and Visual Arts).

Parents had to have submitted their applications by December 8, 2017, to participate in Phase I of the lottery; they could have applied to up to five schools per child. Families received acceptance letters on March 22, 2018, and had until April 5 to accept the offer of admission. Applications submitted after Phase I are essentially guaranteed not to place into any desirable school. 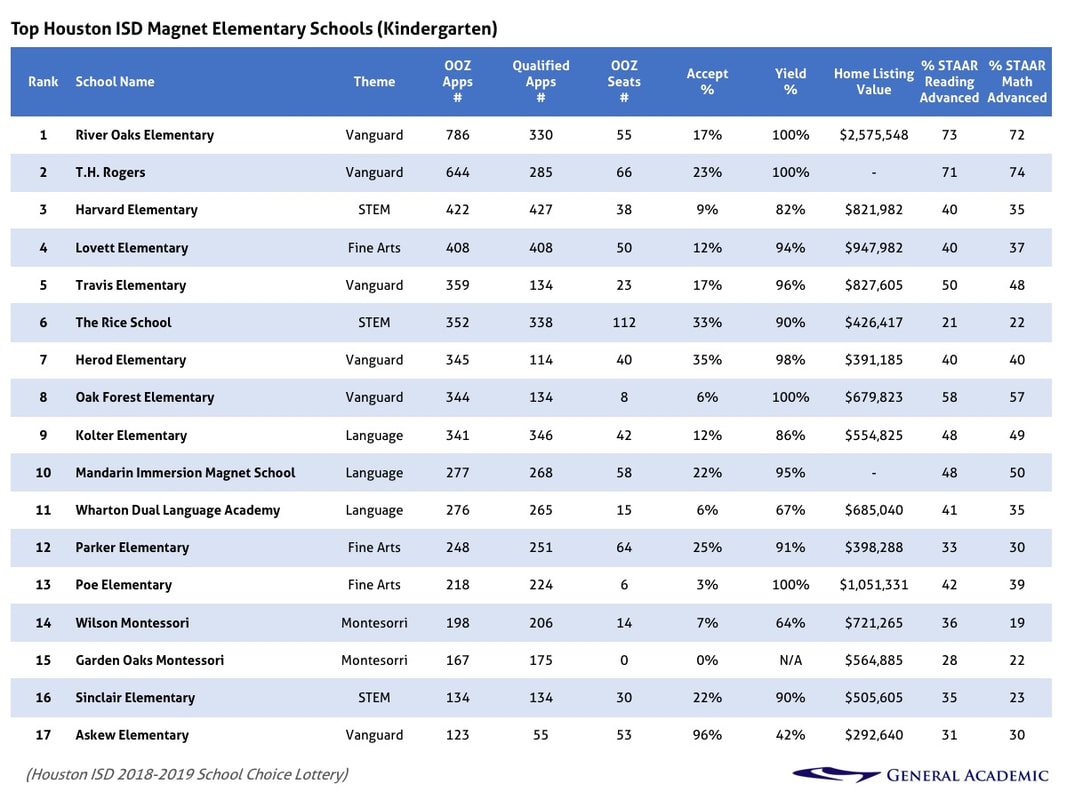 For the 2018-2019 academic year, 58 HISD elementary schools received 7,014 applications from out-of-zone magnet transfer students for kindergarten. River Oaks, TH Rogers, and Harvard elementaries took the top three spots. The top 17 schools had an acceptance rate of 19% on average with 87% of applicants accepting their offers of admission within two weeks.

Seventeen schools or just 29% were significantly more popular than the rest. The top 17 received an average of 331 applications per kindergarten each, versus the average 120 applications for all kindergartens.

Because of their relatively small size and limited neighborhood attendance zones, elementary schools are closely linked to home property values. Instead of participating in the magnet lottery, parents could spend an average of $763,000 to buy a home in the neighborhood zone of one the top 17 schools.

West University, Roberts, Twain, and Bush Elementaries are not part of the magnet lottery, because they can barely accommodate their zoned, neighborhood students let alone out of zone transfers.

To buy into West University’s attendance zone, parents would need to spend an average of $1,356,963 for a 3,647 square foot home that averages 30 years old.

If money were no object, then number one in both popularity and STAAR test scores River Oaks Elementary can be bought into for just $2,575,548.

Named for the late Barbara Bush, Bush Elementary might represent the best value within HISD. Its STAAR scores place it at number five in the district, and parents can buy a 20 year old, 3,224 square foot home in the zone for the relative bargain of $588,495.

Young parents should consider participating in the lottery when their children are as young as three years old. Garden Oaks, Wilson Montessori, and Blackshear Elementary have significant openings for age 3. Garden Oaks, Wilson Montessori, Wharton Dual Language, Mandarin Immersion, Helms Elementary, Arabic Immersion, and Blackshear Elementary have significant openings at age 4. Note that tuition and additional qualification requirements may apply for most families applying to prekindergarten. 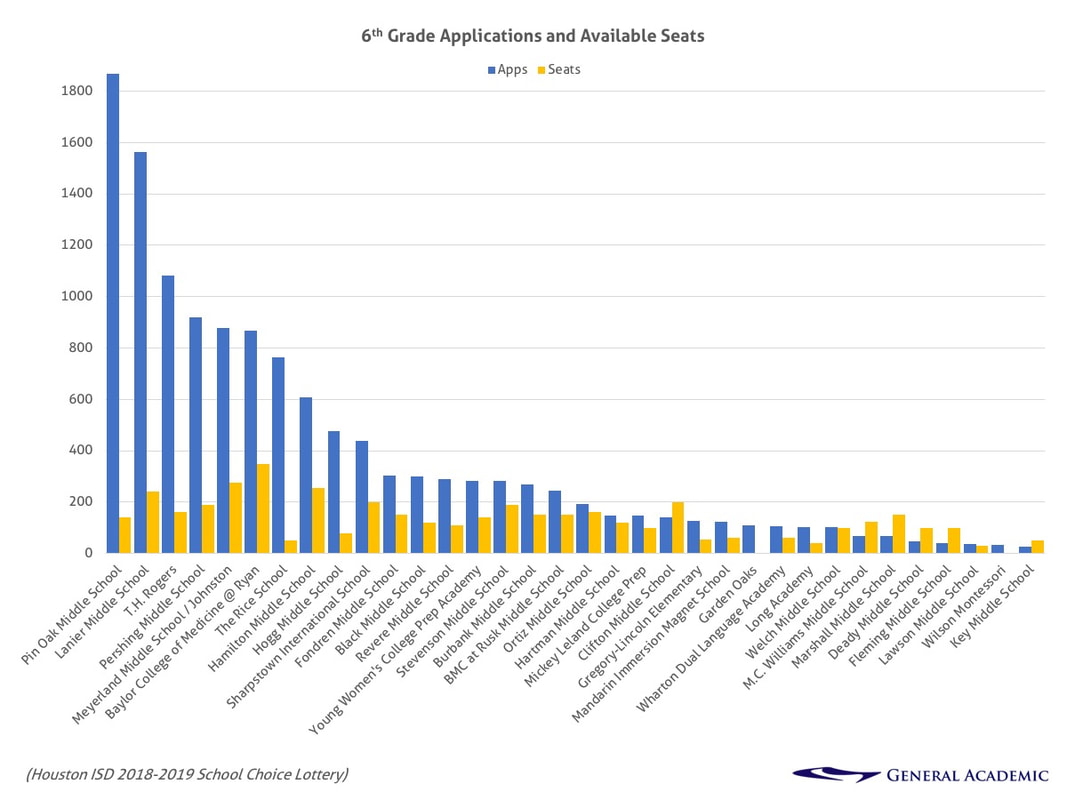 For the 2018-2019 academic year, 34 HISD middle schools received 13,049 applications from out-of-zone magnet transfer students for sixth grade. Pin Oak, Lanier and TH Rogers took the top three spots. The top 9 schools had an acceptance rate of 19% on average, with 94% of applicants accepting their offers of admission within two weeks.

Nine schools or just 26% were significantly more popular than the rest. The top 9 received an average of 1003 applications per sixth grade each, versus the average 384 applications for all sixth grades.

This 30% in STAAR Math Advanced tier represents a big gain for Houston’s middle schools versus 2016, when just 24% scored at the highest level on the state achievement test. The best middle schools by STAAR reading scores are TH Rogers (71%), Lanier (60%), and Pin Oak (55%). 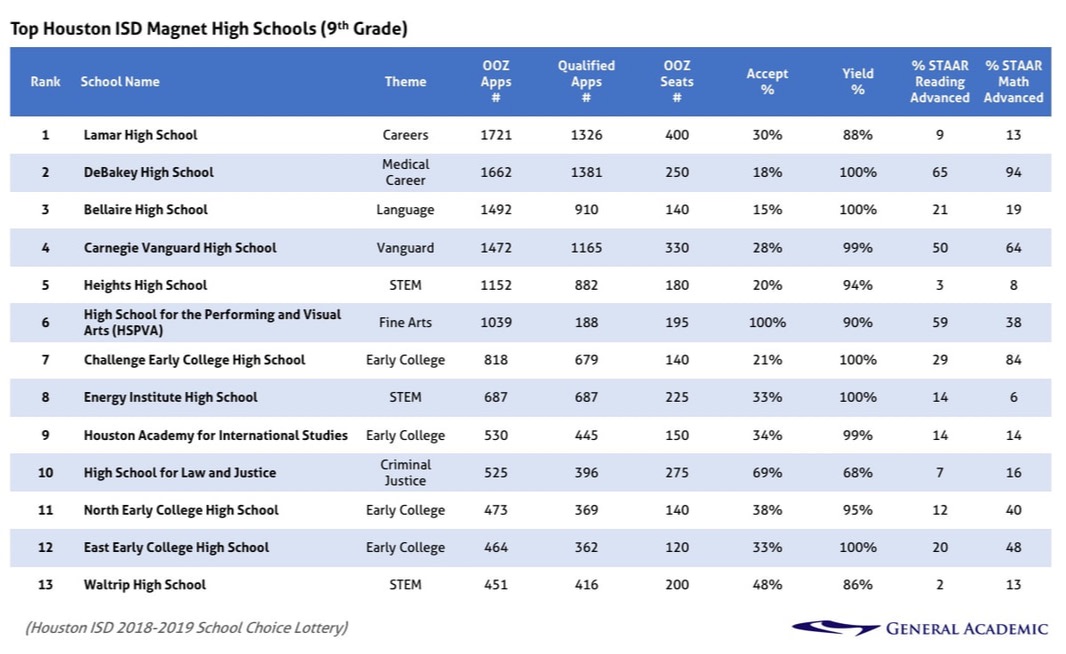 For the 2018-2019 academic year, 39 HISD high schools received 16,299 applications from out-of-zone magnet transfer students for ninth grade. Lamar, DeBakey, and Bellaire took the top three spots. The top 13 schools had an acceptance rate of 38% on average, with 94% of applicants accepting their offers of admission within two weeks. 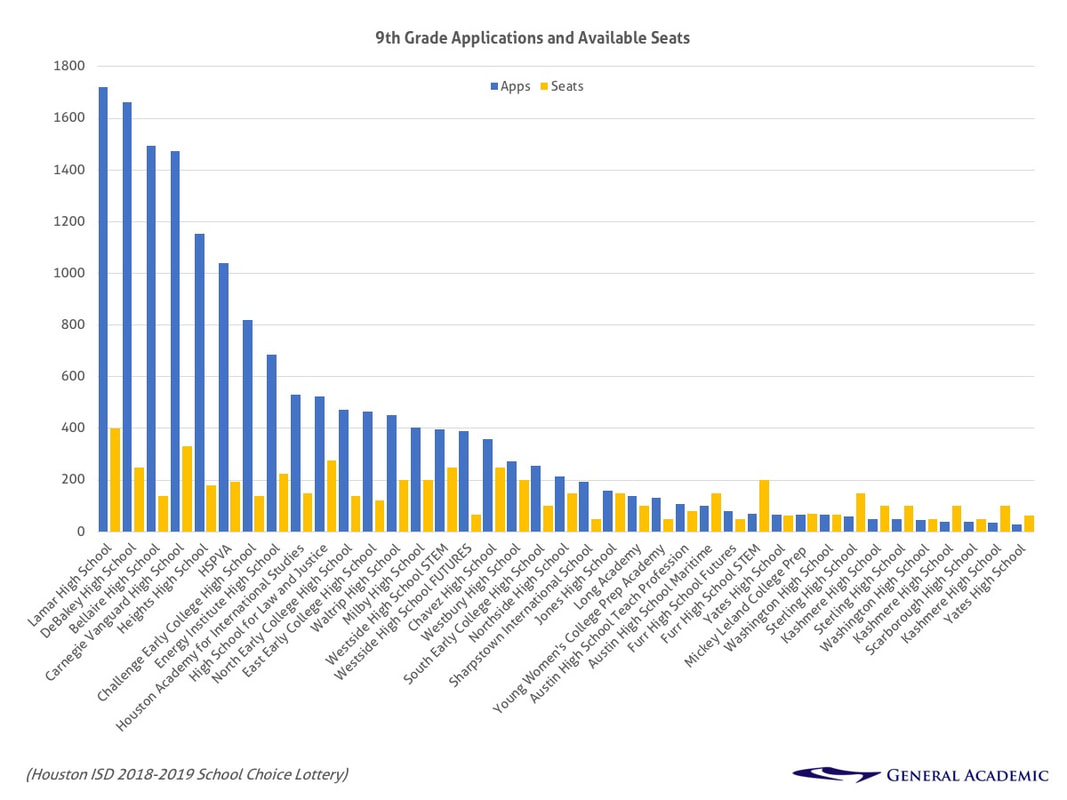 Thirteen schools or just 33% were significantly more popular than the rest. The top 13 received an average of 960 applications per ninth grade each, versus the average 418 applications for all ninth grades.

Compared to elementary and middle schools, HISD high schools put a stronger emphasis on math with STAAR advanced scores that are 50% higher in math than in reading. The best high schools by math STAAR scores are DeBakey (94%), Challenge Early College (84%), and Carnegie Vanguard (64%).

Lamar’s desirability is growing in tandem with its new, steel structure. Just three years ago, Lamar’s yield rate was an abysmal 36% meaning that “almost everyone” applied to Lamar but “almost no one” really wanted to go there unless they had no better alternative. At 88% this year, most families are now applying to Lamar because they actually want to enroll. Lamar’s renovated $123 million campus should be ready for educating by fall 2019.

Shelby Joe is the President and Founder of General Academic. Founded in 2003 out of a Rice University dorm room and based in the Rice Village, General Academic provides tutoring, test preparation, and consulting services. This analysis is based off of data acquired from HISD through the Texas Freedom of Information Act and looks specifically at the information available on April 10, 2018; the number of seats available will continue to change until the school year begins in August. Other sources include the Texas Education Agency, Children at Risk, and RedFin.

Shelby Joe is General Academic's Founder and President. A Mississippi native, Shelby graduated from Rice University with a BA in Political Science in 2007. Having lived in both China and Germany and visited more than 25 countries, Shelby is an avid globalist and speaks Chinese Mandarin and German. He is also the founder of the edtech company Piqosity.