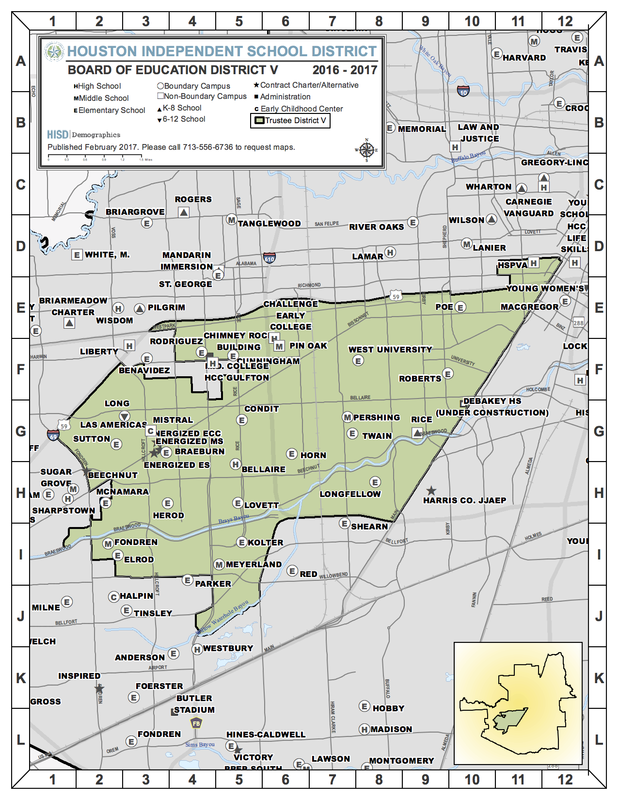 Spend an engaging and insightful evening at Rice University learning about the issues and the candidates for HISD’s Board of Trustees District V.

This non-partisan and non-endorsing informational event is hosted by General Academic and Rice University’s Center for Local Elections in American Politics and Department of Political Science.

Only the 4 candidates for HISD District V will be in attendance. The format of the forum is as follows:
Candidate self-introductions

Seating is limited; therefore, a free reservation is required to attend. Learn more about the HISD Board of Trustees, the candidates, and submit your questions below. 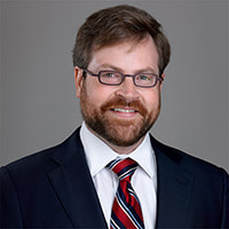 A native Houstonian and Eagle Scout, Sean is a project manager at Chevron U.S.A. Inc.

An alumnus of CCISD’s Clear Lake High School, Sean earned his B.S. in Chemical Engineering from the Georgia Institute of Technology (Georgia Tech).

He currently volunteers as a fifth-grade math tutor at his neighborhood school, Poe Elementary.

Sean is committed to ensuring that each and every young Houstonian receives a stellar education, and believes that this can be best achieved by focusing the district’s spending on learning in the classroom, preparing our kids for the careers of the future, and fostering Houston’s culture of volunteerism in HISD.

​As a fiscal conservative, Sean is eager to start working to close the district’s $107 million budget deficit and ensuring teachers receive a competitive wage after eight years of stagnant salaries.​

1. Focusing spending on learning in the classroom: close the $107M budget deficit and provide teachers a competitive salary by conducting a line-by-line budget review, eliminating programs and departments that don’t tangibly improve student achievement, and redirecting that money to campuses and teachers.

2. Preparing our kids for the careers of the future: focus the district’s curriculum on literacy, STEM fluency, and critical/creative thinking while providing a vocational pathway for student who chose not to go to college immediately after high school.
​
3. Fostering Houston’s spirit of volunteerism: provide simplified and expedited mechanisms for teachers to connect with volunteers (community, parent, other teachers). 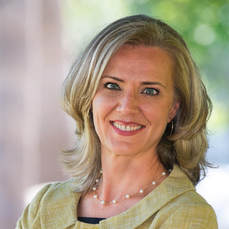 When Sue Deigaard received her two degrees from Rice University, she was the first in her family to graduate from college, and understands firsthand the importance of a quality public education.

She is a 30 year resident of HISD District V and has two children in HISD schools, one is an 8th grader at Pin Oak Middle School and the other is a junior at the High School for the Performing and Visual Arts. Prior to that they attended Mark Twain Elementary School.

Her unwavering belief that education is a cornerstone of our society, economy and democracy has fueled her passion to be an advocate for public education for many years.

She has been an active and informed voice at the state and local levels advocating for effective policies and funding for HISD students, including authoring op-eds for the Houston Chronicle. Sue serves as a Houston City Council appointee to the Houston Center for Literacy Board, is a parent representative on the HISD District Advisory Committee, and chairs the Communications Committee for Arts Access Initiative.

​Additionally, Sue is a Fellow with the American Leadership Forum Class XLIII on Community Education and was a 2015 New Leaders Council Fellow. She has also served on the board of the New Leaders Council – Houston, served as President of the Woodside Civic Club Board, was a founding board member of the Braeswood Super Neighborhood Council, and has been a guest speaker, panelist and moderator for education forums hosted by University of Houston, Rice University, United Way, and Children at Risk.

1. Attracting and retaining the best teachers for every student every day

2. Using strong stewardship of tax dollars for the maximum benefit of students
​
3. Promoting a culture of effective governance focused on student outcomes 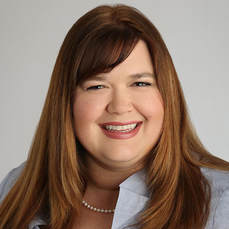 Kara DeRocha is a married mother of three children, all of whom attend HISD schools. She has lived in Maplewood South for the last 16 years. In that time she has founded a variety of school and community organizations.

Her oldest child has a special education designation, and she works closely with HISD teachers, administrators and counselors to effectively implement his Behavioral Implementation Plan.

​Kara believes that there should be a voice on the HISD School Board that can truly understand the experience of families navigating the special education process as well as the experience of neuro-typical students and teachers.

Kara approaches challenges with the passion of a mom and the reason of an engineer. Originally from Round Rock, Texas, she attended LSU and earned a Bachelor of Science in Environmental Engineering. After graduation, she moved to Houston and worked as an environmental consultant and then an independent contractor. 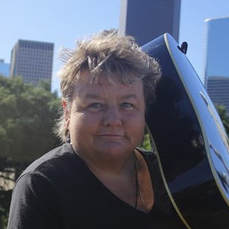 Susan earned her B.A. from Indiana University in 1983 with a double major in English and Religious Studies.

She taught in HISD for 27 years as a classroom teacher and librarian, doing everything possible to excite and engage students in their own learning.

As a campus leader, she learned the art of negotiation and reaching consensus.

With a $106 million budget deficit looming over the 2017-2018 school year, she wants to work with other trustees to find innovative solutions as soon as possible.

​Susan envisions a school board where every possible tax dollar is spent in support of the teachers who work with our children every single day.

1. Failing Neighborhood Schools
Susan is committed to strengthening under-served neighborhood schools. In a district with a $2 billion budget, there should be no such thing as a failing school. Parents should have the CHOICE to send their children to a vibrant, safe home school with consistently excellent academics and enrichment programs. While this is partially about inequitable distribution of funds, it is also very much about hiring leadership and teaching staff who are committed to doing whatever is necessary to spark and maintain a turnaround.

2. Special Education
She believes in funding and staffing Special Education so parents never have to fight for appropriate services for their children. If we hire more diagnosticians to identify students with special needs, then we must make sure we have the teaching staff in place to address those needs. How much money has this district spent in litigation when that money could have gone directly to provide services for our students?

3. Magnet Funding
She supports magnet programs which offer unique opportunities and choices to ALL populations of children. As magnet funding is scrutinized, she wants to make sure effective magnet programs are not destroyed and the money funneled into a general fund. If magnet funding is adjusted, the administration should responsibly channel funds directly to under-served schools in order to create programs similar to those offered in magnet schools. We must also leave enough magnet funding in place to ensure we don’t cripple programs which already serve diverse student populations.

Documents and Videos from the Forum

Click here to download the PDF question slide deck (shown above) used during the candidate forum on October 18, 2017.

Included on this page are excerpts from the candidate forum. Each video contains one question and the responses from each candidate.

Unfortunately a technical glitch meant that questions 3-5, 9, and 10, were not properly recorded and are therefore not included here. Each recorded question is approximately 5-minutes.

To see the accompanying slide with the video, refer to the presentation above.

How to Attend the Candidate Forum at Rice University

When, Where, and How to Vote in Harris County

The Role of the School Board of Trustees 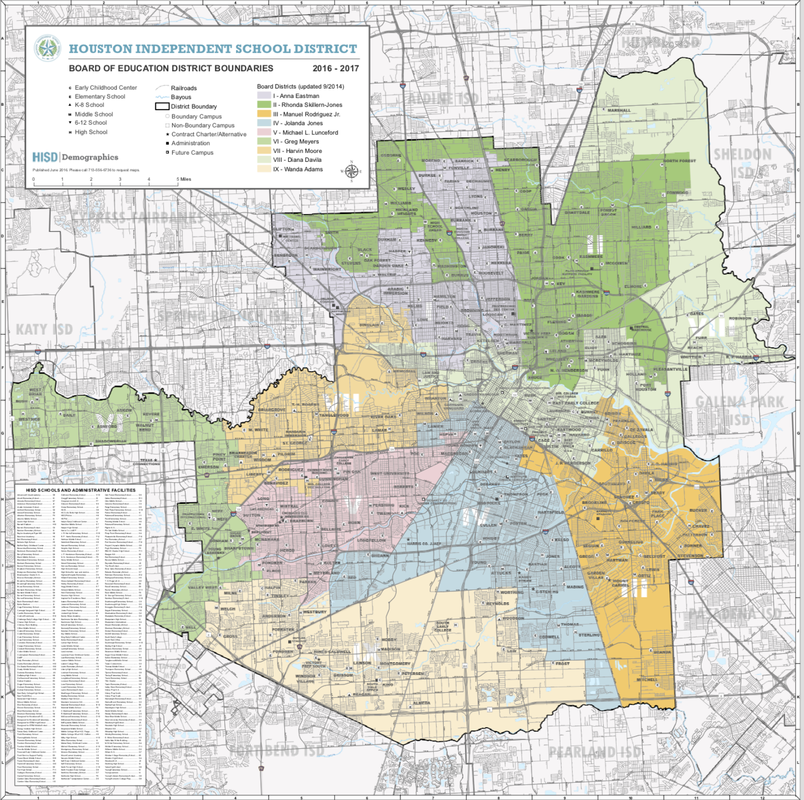 The Houston Independent School District (HISD) is governed by a Board of Trustees comprised of one elected representative from each of 9 districts (see map at right) for nine total Trustees.

Like a private business, the Board has broad policy-making and review powers but is otherwise obligated to leave the execution of policy and daily operations to the Superintendent, Chief Audit Executive, and their staff.

In fact the only and arguably most powerful role the Board has with regards to personnel is the hiring, firing, and review of the Superintendent and Chief Audit Executive.

While the Board has significant local power, it is still subject to and constrained by state and federal rules and regulations.

As defined by HISD’s Board Policy Manual (viewable online) responsibilities include:

Furthermore, the Board is expressly PROHIBITED from engaging “in activities that interfere with the administrative responsibilities of the Superintendent and staff”:
​

Students identified as gifted and talented (GT) currently net their school 12% more funding on a per pupil basis. However, many popular district V schools are at risk of losing their GT magnet status because they are not able to enroll enough out of zone students. Furthermore, as recently as this year HISD has sought to cut spending on magnet programs.

Most families would prefer to attend the school closest to where they live for a lot of reasons. However many families – particularly those outside of District V – do not care for their zoned, neighborhood schools. HISD faces the challenge of making all neighborhood schools desirable.

With a finite amount of money in the budget, schools and programs must necessarily compete for funding. HISD must continually determine the most equitable and results-driven way to distribute funds. However, further complicating matters is that HISD is currently obligated to pay $100s of millions of dollars to Austin for wealth redistribution through “recapture” rules.

The average American K12 student spends approximately 10% of their academic career preparing for and taking standardized tests. While many of these tests are mandated at the state and federal level, the district must continually evaluate how to best advocate for/against, prepare for, administer, and utilize these tests.

Federal law requires public schools to not only accommodate but to modify curriculums according to the needs of students with special needs. However HISD’s percentage of special needs students is among the lowest in the nation, leading many to believe that the district is trying to shirk its responsibilities. 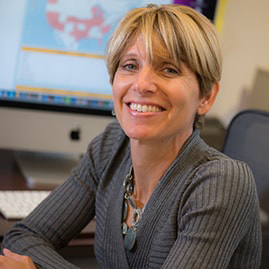 ​Melissa serves as both a professor of political science at Rice University and the director of the Kinder Institute’s Center for Local Elections in American Politics (LEAP). 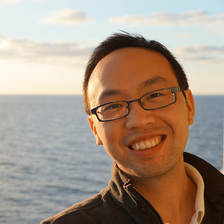 Shelby is the founder of Piqosity and president of General Academic, an academic consulting, publishing and tutoring company based in the Rice Village.

Civic Duty Rice is a new student organization that strives to engage Rice students and Houston area youth in civic education and community outreach initiatives. We aim to teach young people the importance of civic engagement and to empower them to create change in their communities through increased service activity, political activism and efficacy, and voter participation.